Attached below are two photo’s (quality is not the best) of the Vendetta’s Rugby team trip to WARREN, Western NSW during the major refit, June 1967.

Many memories from Butch O’Brien who was not smiling because of the fact he had the best “corked thigh in Australia” following that game and the trip back to GI in a Mini Cooper with a broken windscreen was so “enjoyable”!!!!! Two weeks in Hospital at Penguin., by the way they won. 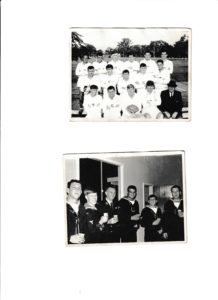